The schedule is set and provisional line-ups are available for this Saturday’s PBR Classic and Kansas City Croquet Club Doubles Championship. The action starts at 1:00 p.m. with the doubles event and all teams are asked to be on hand 30 minutes prior to start time. A quick rules refresher and tutorial will be offered in advance of the start.

The PBR Classic Singles Six-Ball Championship is slated for a 5:20 p.m. start with three qualifiers and two players advancing from each to play in the championship final estimated to start at 7:50 p.m.

END_OF_DOCUMENT_TOKEN_TO_BE_REPLACED

The Kansas City Croquet Club is hosting a club doubles championship and a revival of the six-ball PBR Classic to be held September 26, 2020 at the Willow Creek courts in Kansas City, Missouri. The doubles championship is open to all KC Croquet Club members and legacy PBR Tour players. The event will start at 1:00 p.m. and is limited to eight teams in a single-elimination format. The seeding will be random.

END_OF_DOCUMENT_TOKEN_TO_BE_REPLACED 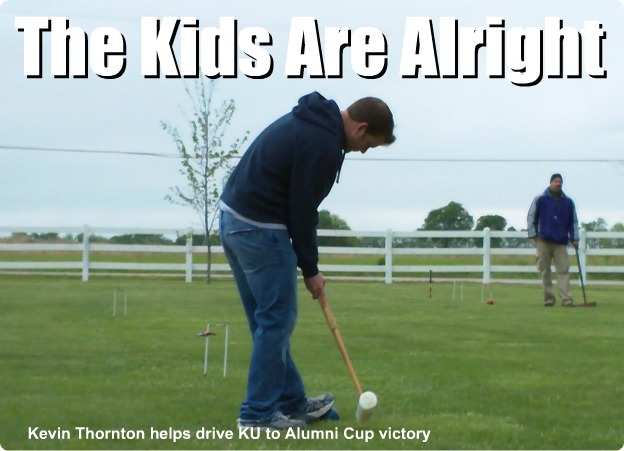 STILWELL, KS — After falling into a 3-1 deficit in the opening round of the Alumni Cup test on Friday, KU’s chances when play resumed on Sunday looked a lot like the weather — cold and bleak. No worries though, KU came out on fire and swept the third round to move out to an improbable 4-3 lead. All of the sudden scratching their way to tie to force an extra round doubles match changed to “we can win this now.”

The third round momentum switch occurred when KU’s #2 Kevin Thornton pulled off a 32-27 upset win over KSU’s #1 Steve McMahon. With KU’s #1 Dylan Goodwin taking a predicted win over KSU’s #2 Greg Lloyd 32-4, the Jayhawk alumns pulled to 3-3. The Thornton win was a shocker in that he had dropped the matchup with Greg Lloyd on Friday night 32-29.

But there was more. The final game between the number three’s was still in progress and all of the other test players got a chance to watch the action. Playing in just his third partner ball nine-wicket game KU’s Chris Ward was able to sneak out a 32dp-13 win over KSU’s Chris Stephens. That’s right — a double peel for the win.

With a 4-3 lead going into the fourth round, KU was playing with house money. In the #1’s game, Goodwin established a commanding lead and control early Steve McMahon. On court one, KSU’s Lloyd played to form and beat Ward 32-10 to briefly tie the test at 4-4. Despite a few end game flubs, Goodwin finished McMahon 32-6 and a 5-4 lead to KU.

All eyes then turned to the Thornton-Stephens matchup. Thornton had established a good lead and control of the game, but Stephens did have some late openings that allowed him to disrupt Thornton’s march to the test-clinching victory. Eventually though, Thornton lined things out and pegged both balls for 32-23 win.

The 6-4 overall win was KU’s third straight in the young history of the Alumni Cup. KSU won the first Alumni Cup event in 2008.

All of the singles matches ended with double-peg winners which demonstrates that club is probably ready to upgrade from the Oakley Woods sport wickets. The fields were fast with just enough un-predictability to offer up some good plot twists.

STILWELL, KS — The Kansas State Alumni squad survived a chilly evening on Friday night to snag an early 3-1 lead over KU in the Alumni Cup test. All games played out to the rankings with the opening doubles match serving as the key to a fast start for KSU. Playing for KSU, Steve McMahon and Greg Lloyd were able to secure a 20-17 win over Dylan Goodwin and Kevin Thornton. Goodwin had a longshot chance to force an extra round while in last balls but grabbed the turf on a long roll out shot and came up short in trying to establish a rush. Action resumes Sunday afternoon and KSU needs just three more wins to claim the test.

STILWELL, KS — It has been determined that single’s games played in this weekend’s Alumni Cup test will count in the KC Club Championship ladder. Rankings start as follows: